Tashota Resources Inc. (TRI) is pleased to provide an update on recent activities: 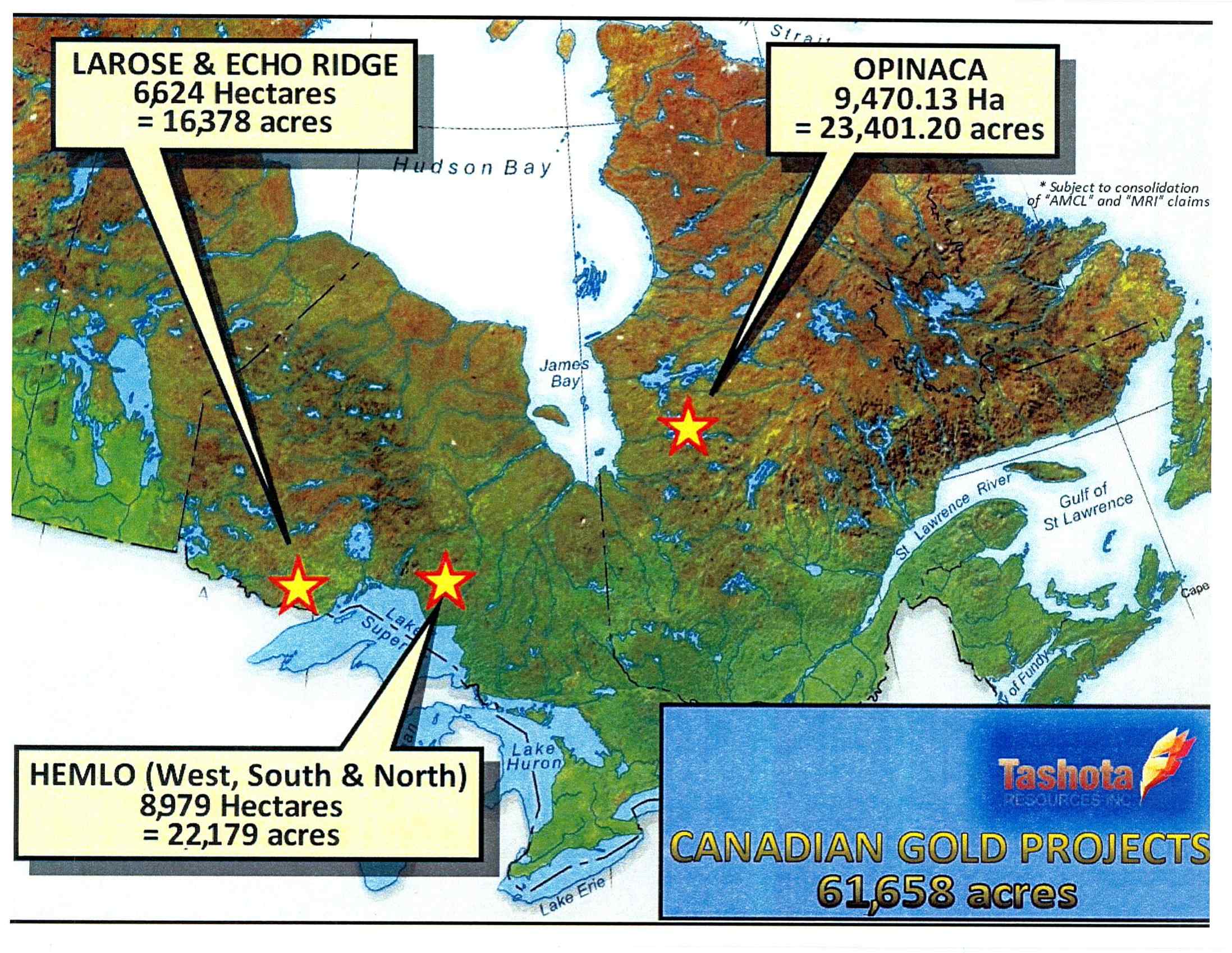 Barrick Gold has been very active during 2015-2016 at Hemlo, including drilling and exploration. As a result there is renewed activity in the Camp with claim staking by some junior companies.

TRI has contracted Prospectair to conduct a 790 kilometre T-DEM airborne survey. This airborne will be conducted during the next week.

– Situated 110 kilometres west of Thunder Bay in the Shebandowan Gold Camp, the Larose property includes the Larose Shear Zone (LSZ) which runs approximately 9 kilometres and probably another 4-5 kilometres through the Echo Ridge property which is 50% controlled by TRI. The combined properties cover approximately 16,500 acres (including the Larose and Echo Ridge). Staking during the past month increased by 4,400 acres to the present 16,500+ acres.

There is a renewed interest in the area with Wesdome Mines (3,000,000+ million ounces Au) expanding their land position and Kesselrun Resources Ltd acquiring the Ardeen Mine property from Pele Mountain, which adjoins the Larose.

TRI controls the largest land position in the immediate area and has commenced drilling near the P1 Trench and Larose Trench. The first drill hole intersected an “unexpected” high grade gold bearing zone, including 5.65 grams of gold per tonne (g/T Au) over 3.00 metres from 42.00 to 45.00 metres downhole, including 0.50 metres of 27.69 g/t Au. If adjacent samples with lower gold contents are included, a section from 38.50 to 46.00 metres, averaged 2.84 g/t Au over 7.50 metres. TRI is presently performing additional exploration drilling to determine the extent of the Larose/T-Trench zone.

TRI has contracted Prospectair to perform a T-DEM airborne survey of approximately 760 kilometres, to be conducted after completing the Hemlo airborne.

– Situated in James Bay, Quebec; this area has drawn the attention of investment institutions since Goldcorp acquired the Elenore (approximately 8-9,000,000 ounces Au) from Virginia Mines. TRI acquired a 50% interest in approximately 18,600 acres from Trincan Capital in 2014 and is presently in negotiations to acquire a 100% interest in 4,500 acres situated in the center of the 18,600 acres. An airborne T-DEM over 1,400 kilometres was conducted by Prospectair in 2012 which indicated potential good drill targets for winter drilling to commence 2016. The property is surrounded by Virginia Mines (now Osisko) and Goldcorp to the east, including Sirios and Beaufield. There is major exploration and development taking place in the Opinaca area, including Opinaca.

The properties listed above have drawn attention from investment institutions and management discussions are ongoing with regard to financing the drilling and exploration program during the balance of 2016.

Management has commenced an offering of Units consisting of treasury and flow-through shares which is now available to shareholders and the public; presently restricted to “accredited investors” only, while completing an Offering Memorandum expected in late August 2016.